Recently I had the opportunity to go back to my in laws house in a village in Melaka, and as in every village house, there are edged tools which are used everyday. Below are some typical tools you find in a home.

The above picture shows a well used golok. Goloks and parang have a common use in Malaysian households , especially in rural areas. They are used for cutting weed, trimming trees and plants and also for peeling coconut. Most of the time, people do these simple tasks themselves as they have the skill and time, compared to city folks who may not have a single tree in their compound or apartment. City folks find it easier to go to the market or mall to get what they need, so peeling their own coconuts ( for santan – a main ingredient in Asian cooking ) is often out of the question. Just by looking at the worn out edge on the parang above, you can imagine the amount of work it has gone through.

The picture  above shows another golok alongside the first golok, and you can see that both are pretty worn out. The Goloks have probably been used for 10 years or more. The golok you see with the taped up handle is slightly different from the first one as this golok has a metal handle . The handle is actually the same material used for making the blade, but is flattened and curled into a round handle. It is sort of  a full tang knife , where the tang is actually the handle itself. You can see some closer pictures of the handle below. Some electrical tape has been wrapped around it so it is more comfortable to hold.

As you can see, beauty is irrelevant here, but function is. it doesn’t matter if your parang is all shiny and new, it can be black , worn out and rusty, but serves it’s purpose well. 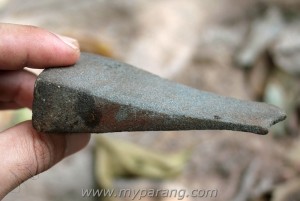 A parang isn’t very useful if it is blunt, hence the worn out sharpening stone as well. Note how rough the stone is . For general hard work, a fine mirror edge is seldom needed. What is needed is a sharp working edge and sharpening can’t take 1 hour. You need have a sharp parang in 5 minutes and get along with your task at hand.

I wont be surprised if some Malaysians have not seen the tool above. It looks like a sharpened spade mounted on a length of wood . The wood is then buried in the ground so the “spade” protrudes out about 2-3 feet above the ground. It looks like someone buried a spear halfway. This tool is used to peel coconuts, and it requires skill. Not every house has this, and it is more for those who peel coconuts often or in large quantities. If you are not familiar with this, you could injure yourself badly if you slip or fall on it. Perhaps I could do a video one day to show how it is used. I remember seeing one in my grand mother’s house when I was much younger, but it has disappeared many years ago, probably stolen by scrap metal thieves.

When not in use, the sharp edge is protected by placing a can or a coconut ( or both ) on top of it.